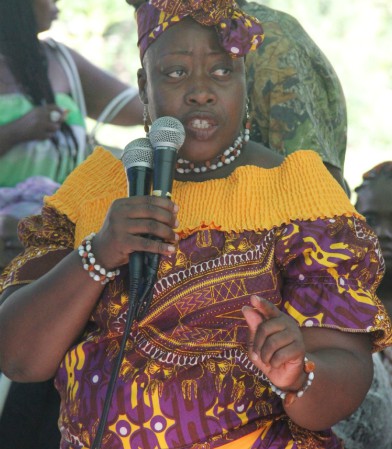 Marcia ‘Kim’ Douglas is the Colonel of the Charles Town Maroon Community. As leader and spokesperson for one of the several maroon communities in Jamaica, Colonel Douglas stands as the first woman to occupy any such position of authority among them in present day. As indigenous women are reclaiming their rights as important decision makers and contributors to community development Colonel Douglas carries a vision of prosperity through social and economic gains for her Community. She has represented and continues to represent the Charles Town Maroon Community at both local and international gatherings and has participated in discussions on a range of topics that includes, but is not limited to, Indigenous Knowledge, Climate Change, Sustainable Development, Community Tourism and the Rights Protection and Care of Indigenous Peoples. The Colonel is committed to the retention and promotion of all that signifies and portrays maroons and their heritage and sees this as a critical component of the sustainability of the community.

Colonel Douglas assumed leadership of the Community after the passing of the late Colonel Frank Lumsden with whom she had worked for the duration of his tenure. An herbalist extraordinaire, the Colonel makes medicines from native herbs, plants, and fruits using the indigenous knowledge handed down to her. She knows that every plant has its own purpose and is to be analyzed and used accordingly in order to achieve maximum benefit. She also makes wines, teas and craft items.  In spearheading the efforts towards growth and development Colonel Douglas has maintained and honored relationships with other indigenous communities overseas, for example in Suriname.

With the support and assistance of the Charles Town Maroon Council, the Acting Colonel intends to build on past initiatives while evolving and germinating new ones to achieve desired goals.  She is especially devoted to the children and young people of the community, and is committed to doing what is necessary to allow them to be confident in their identity as maroons and all that means.  Acting Colonel Douglas, standing on the shoulders of ancestors such as the famed maroon war strategist Quao, is ready to serve her people.